The use of Participatory GIS (PGIS) as a tool for conflict transformation in order to reduce the potential for the outbreak of conflicts. 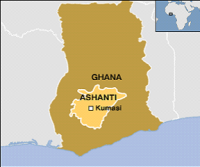 When a government plans to build a new street, they may use land belonging to communities. PGIS can be a tool that is helpful increasing dialogue between local populations and the government. If the latter wanted to build the street trough a forest without the knowledge which part of the forest plays an important role for the community it could lead to conflicts. The easiest way to show how land is used, is through maps. They make it clear for both parties which parts of the land could be used for the street. The collaborative nature of the project and the links between those in charge of planning and the local community with regard to the planning process increase the chances that a project makes sense locally and that there is a sense of ownership.

This was an example how PGIS could avoid conflicts. The next example will show how PGIS could be used in land-use conflicts which are already existent. The example is based on a case-study by Peter KYEM (2006) which shows the potential utilization of PGIS in an early stages conflict.

Resource scarcity in combination with environmental change or unsustainable resource allocation can lead to conflict. In the following case PGIS was used as a useful tool to develop strategies to optimise conflict management between different stakeholders. PGIS was used to bring them together and to understand each other’s perspectives. Originally the forest in Ghana was preserved to “meet the future demand of wood” (KYEM 2006, p.38). But later the forest became the main source of the economic development. Deforestation was in conflict with the shrinking food security in the forest communities. In Konfiase, the area concerned by the case-study, is located in the Ashanti Region. There was a dispute between local business men who made profit out of the timber and local farmers which were cropping food in the forest, leading to a rift between the supporters of the venture and the preservation group. After discussion, a meeting was organised with representatives of both groups. The two competing demands were “a request to preserve the partly degraded Aboma forest reserve and its resources; and a demand to log the timber that remained in the forest” (ibid., p. 38). After that some factors for the creation of maps was identified (roads, towns, slope map, land cover, timber resources, streams, private farms) out of which two suitability maps were created. After the criteria were ranked, the next step was a conflict map, which was facilitated by the discussion between the stakeholders. The outcome was that only in a relatively small part of the forest had overlapping interest, making it possible to focus on these areas.

As a result of the GIS analysis the stakeholders could “how a prolonged conflict could jeopardize the interests of their opponents as well as their own long-term interests in the forest” (ibid., p. 39). Trough PGIS, a dialogue between the stakeholders was possible and they build mutual trust because of their work together. In the end of the process the two parties made compromises which lead to a peaceful solution of the conflict. PGIS by itself can’t solve conflict but it is a helpful facilitation tool. In above example, the chiefs and elders encouraged the stakeholders to work together on a solution. During the process, the stakeholders recognised that it is difficult to work together on development projects which benefited all of them in case there is a dispute. So PGIS played an important role in the mediation process. (KYEM 2006)