Stages in violence: from an isolated dispute to generalised violence 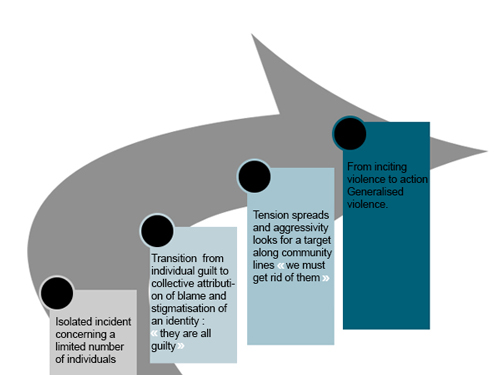 Under the combined influences of the frustrations that pervade the population, dominant cultural predispositions, and the burden of symbolic violence felt in a given context, generalised violence can emerge from any isolated instant of conflict, following the sequence in the diagram above.

From the “green” step: The point of origin is a violent incident or an isolated conflict, experienced as dramatic only by a limited number of protagonists (violent disturbance, murder, etc).

Escalation from “green” to “yellow”: through rising anger there is a coalescing of negative emotions. Local prejudices then favour the logic of an identity-based attribution of blame (memory, culture, context).

In the absence of a third party able to block the sequence ‘attack-defence-counter attack’ violence drags on. This combines with an identity-based attribution of blame and results in an increasing number of victims.

Different forms of violence (verbal, anti-social behaviour, attacks against people and property, graffiti etc.) progressively adopt a strong identity based pattern, and aggressions along identity lines becomes more frequent. The idea that the conflict is between the two communities becomes established.

The communities become actors in the conflict. Other significant but isolated pockets of violence appear in echo to the first and their chronology becomes linked to the original incident. At this point the sites of violence can be geographically discontinuous and the violence is “low intensity”. During this phase police operations can still control the situation.

Initially isolated and disorganised incidents of violence progressively become of an organised nature. Within each community there emerge conflict entrepreneurs, planning and organising confrontations. Space starts to reflect this evolution in a more coherent and continuous way, with the formation of front lines and a concentration of forces: constitution of militias and controlled territories is favoured by the pervasiveness of identity based thinking in the normal day-to-day use and occupation of social spaces.

This is a generalised state of violence that is aimed at a struggle to the death. The resources and equipment of the parties have become quasi-military, with the emergence of classic tactical objectives of war: obtaining victory over the enemy community. The deadly impact of the violence becomes significant. Only military intervention can restore “peace” at this stage.

N.B: In the three phases before Conflict (Levels 1 to 3) the sudden unplanned and popular nature of the spread of violence shows the essentially ‘chaotic’ nature of the development of the situation. In this situation the spatial dimensions of the street, informational dimensions of rumour and the ‘bush telegraph’, and institutional dimension (the intervention of mediators) produce determining interactions. This is ‘chaotic’ in the sense that the same causes (apparently similar situations) will not result in the same effects. In an environment where hostile relations are the norm, and the danger of conflict is quasi-permanent, the breaking point is never easy to detect. We must however note that evolution towards conflict (Level 4) is favoured by context. The context here plays the part of conflict accelerator, such as a rise in frustrations increasing the likelihood of conflict (elections, critical rise in shortages etc.)

In analytical hypothesis is laid out in the diagram below we can see how from a critical situation limited to a certain part of town (school, market, block of houses, meeting hall etc.) the violence can, like a fire, set the whole local area ablaze. This is done according to a scale of four steps with increasing levels of conflict and violence arising from the original incident. 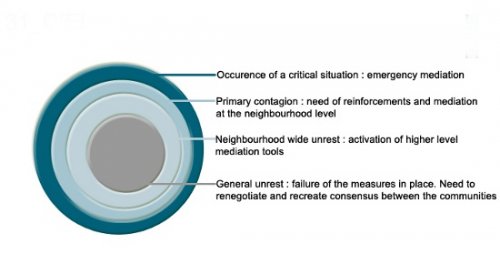 Creation of mediation belts by training emergency mediators who can act as close as possible to each critical situation that is likely to escalate to calm them, or to use a clearer image to help them ‘cool down’. The idea behind this is that the community needs to be able to come together in such situations to put out the ‘fire’ before it spreads. This should be as when faced with an actual fire, which creates mobilisation because each individual is aware that the blaze will spare no one, and that you must help your neighbour put out a fire if you do not want your house to burn. Each of these critical situations needs to mobilise the communities so that the spark is put as soon as it is lit, to check all risk of conflagration with the disorganised pattern of a bush fire.

Using this image a mediation belt, in order to create an effective and solid fire-break, needs to be made up of people able to see and react differently to critical situations that occur. This would mostly consist of acquiring the capacity to carry out emergency mediation, partly inspired by methods of so-called principled negotiation developed by Roger Fisher and William Ury (Fisher R. & Ury W. 2006):

Be able to act to stop a violent situation: From this comes the idea of the belt, which presupposes a group action where the group have at their disposal a large enough physical presence to control the agressivity of the parties involved, and that through their visible neutrality, their intervention is legitimate in the eyes of the conflict parties or any third parties that would be tempted to interfere.

Focus attention on the facts and stigmatise the behaviour not the people: Immediate or emergency mediation is neither trial nor instruction. It does not aim to establish responsibilities, but to calm a situation. To re-establish the importance of shared values and legitimate institutions that can resolve the dispute.

Disassociate the individual from the community: Important in the strategy of division of responsibility is how it can appear to the observers of the situation. The normal tendency in an environment with strong prejudices is that they lead to the assimilation of blame from individual to the community, with the result that the whole becomes incriminated along with the individual.

Managing language and emotions in incidents: Managing emotions can be more important in sensitive situations than dealing with the basic issues, which are better kept for another time and place (Lempereur & Colson 2004). Spontaneously creating a space for listening, which gives back priority to words over fighting; picking the right words with which to react, and avoiding those that can worsen the situation; giving empathy to all; and knowing that everyone is attached to their pride and needs recognition are all means to control context driven anger.

Extracting or protecting the dispute from the street in order to bring it to conflict solving institutions: Getting out of, or avoiding that the conflict spills into the streets is a high priority in prevention strategies. It is a matter of avoiding that the ‘spark’ makes contact with the ‘powder keg’. To this end emergency mediators simply need to convince the parties in the dispute to turn to customary or judicial methods of conflict resolution.

The putting into place of mediation belts will occur through a wide dissemination of emergency mediation methods in neighbourhoods, consisting of educational conversations on the culture of peace, sensitive areas (for example markets) whilst targeting certain groups (bike taxis, traders) and actors (politicians, neighbourhood leaders etc.).

Putting into place a system and strategy of post-conflict mediation. This system needs to be built on principles of legitimacy and inclusivity, with reconciliation as the main objective. Strategy needs to be based on the ability to give sustained attention to the conflict, prioritizing proximity and permanence, and founded on strong complementarity with robust institutional approaches, as much in the form of justice as from the administration of the region.

For example we noted noticeable suspicion in the relations between Choa Arab and Kotoko communities. Between them peace seems to come notably from a realistic understanding by the latter of the power balance which currently favours the former, and the social control the State exercises over local collective action. Past problems have not been dealt through sincere and open dialogue between representatives of the two communities and the State with the potential to open out into a public and ritual forgiveness between the two communities. It seems generally accepted on both sides, and particularly on the part of the State that ‘some things are better silenced’. Conflicts of interest are not separate from this logic, where it is sometimes preferable to ‘divide and rule’. As a result our emphasis has always been on negotiation within the various circumstances of crisis. Negotiations that can lead to political concessions within the framework of the sharing of different representative functions between the elites of both communities.

Legitimacy and inclusion need to be central points of reference to the principles of action in this construction. Legitimacy in the measure that all initiatives, in order to be accepted, need to be carried by people holding a positive social role with a strong following and recognised by both sides. Inclusion in the sense that the desired impact is at the social level, so the method needs to include various categories of eminent people by the criteria of age, gender, socioeconomic affiliation, politics etc. In terms of strategy we place an emphasis on the notion of conflict sensitivity, sanctioned by the OECD [1]. The idea is to systematically take into account all the effects of interventions on the conflict in order to avoid involuntary negative results. This conflict sensitivity needs to be sustainable. This presupposes an ongoing presences and a capacity to respond quickly to incidents. The systems of post conflict mediation therefore need to be structured into different levels, going from the scale of the neighbourhood, to the scale of the locality and work towards the decompartmentalising of the communities by offering a structural solution to the local inter-community problems. This entails the necessity of strong links between these processes and local administrative government.