The fundamental presumption underpinning this conflict transformation tool is, “when a critical mass of medium-level and grassroots enthusiasts manage to heal its traumas, process its sense of victimhood, and come to forgiveness, there will be hope that the war mentality in the society will gradually be changed." [1] In order to do so, it is necessary to break free from the cycle of revenge.

If past psychological traumas caused by conflict are not properly addressed and healed, the natural responses of pain, shock, denial and panic can escalate into renewed violence with the previous victims becoming aggressors. A failure to deal with the reality of the trauma and suppression of the victims’ grief and fear only intensify feelings of anger and hatred directed towards the perpetrators and towards anything associated with him or her, ranging from family members and neighbours to members of the perpetrator’s gender and ethnic, religious and political group. The perpetrator is dehumanized, deprived of any possible good features and set into a black and white world reinforced by constructed myths and collective histories. If a trauma is left unhealed, the resulting anger and hatred can lead to the belief that relief from pain can only occur if its source or cause is punished or destroyed. If the justice system fails to accomplish this, or the punishment received by the perpetrator is considered inadequate, victims might become prone to perform the act of “justified aggression”, thus completing the cycle of revenge [2]. 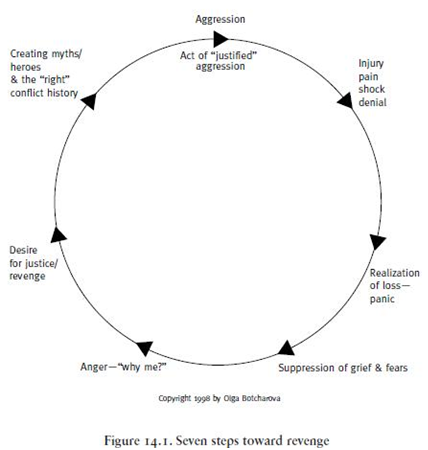 1. In order to break the cycle of revenge, it is first necessary to restore the self-identity of the victim. Instead of denying and suppressing their trauma, victims need to identify and confront the resulting fear and pain by expressing their emotions. By acknowledging and accepting their feelings, victims may be able to restore their ability to think rationally and prevent the emotional transformation into anger and hatred. Victims can share their stories with other victims, which will help them process their personal trauma and understand that they are not alone. Although this may help victims regain their lost self-confidence and free them from victimhood, they will still perceive their perpetrator as a non-human, irrational being unworthy of their forgiveness.

2. The process of re-humanization of the perpetrator is painful, complicated and evokes a lot of resistance from victims. It is sometimes necessary to re-establish an emotional connection and a relationship between the parties of the conflict. Based on years of experience, it is believed that dialogue serves as a foundation for re-establishing relationships because it “promotes mutual confirmation and thereby serves a fundamental need of parties to a conflict to be recognized as individuals with values and unique (and valued) identities.” [3] Sharing of personal experiences and stories helps to create an emotional bridge between the opposite sides of a conflict, allowing victims to discover common beliefs and concerns shared with their perpetrators. Acknowledging the pain felt by those on the opposite side of a conflict may allow the victim to gradually develop compassion towards “the other” and, thus, begin the process of re-humanizing the perpetrator(s).

3. Step-by-step, the cycle enables victims to acknowledge trauma, work through the experience, and understand how symptoms of trauma manifest within themselves and externally, through relationships with others. This entails deep personal transformation, which empowers victims and helps them to take the risk of forgiving their perpetrators. Forgiveness, considered the “culmination of healing” and “the most vital need of a victim,” is essential for reconciliation [4]. It not only paves a way to freedom from victimhood, but also provides a safe environment for the perpetrator to respond, interact and eventually admit guilt. 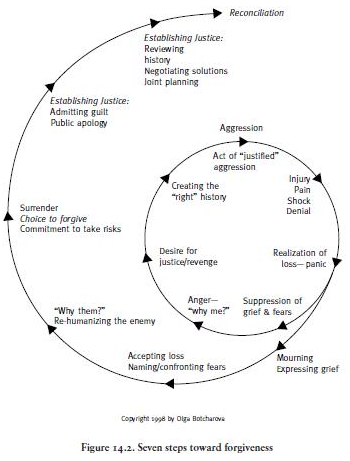