Is there no other way ? The search for a nonviolent future, unveiling a hidden history by Michael Nagler.

Michael Nagler reveals the principles by which nonviolence functions against all levels of conflict. He makes an important distinction between strategic and principaled nonviolence and demonstrate how nonviolence always works in the long run, even though changes might seem bleak at the onset. 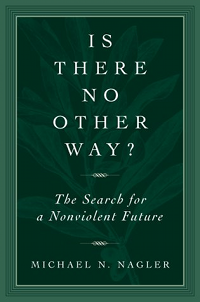 The book Is There No Other Way? The Search for a Nonviolent Future begins with the achievements of Mahatma Gandhi, and follows the legacy of nonviolence through the struggles against Nazism in Europe, racism in America, oppression in China and Latin America, and ethnic conflicts in Africa and Bosnia. Nonviolence, he proposes, has proven its power against arms and social injustice wherever it has been correctly understood and applied. He then explores these same principles in the context of the growing violence of American society.

Michael Nagler is a well-known American peace scholar and founder of the University of California Peace and Conflict Studies programme. His approach is not only historical, but also personal. He argues, drawing upon the experience of Gandhi and other activists that the shift to nonviolence begins within the individual, through the reshaping and re-visioning of how one understands the world. He then shows how from changes in the individual, changes in the larger community follow. Nonviolence is therefore much more than a form of protest in his understanding. In this fiche document I will highlight his conception of nonviolence and the question how we can assess whether it works.

Nagler, following Ghandhi, explains that the way we document history does not recognize or does not document experiences with nonviolence. Instead it is writing about events turning around violence. Gandhi said in 1909 that what history documents are breakdowns in the social system. Gandhi was trying to make a breakthrough in the history of consciousness, to make visible the power of nonviolence and offer practical guidelines how it should be applied.

Difference between nonviolence and pacifism

Nagler says that nonviolence and passivism are often confused. He explains that: “When you’re distant from something and you don’t hear about it very much, like nonviolence, you tend to equate it with something you know a little about, which is pacifism. There’s a bit of overlap between nonviolence and pacifism, but there’s a very important difference”. The way we usually define pacifism is negative: « I will not participate in . . . » usually a war. Whereas the real, principled nonviolence position starts from a positive: « How can I make a creative, constructive, long-term impact on the situation I’m in and, ultimately, on the world I’m in? » {{Nonviolence requires a very active approach and may even require large sacrifices of the ones applying nonviolence in extreme cases. In the fouth chapter of his book Nagler defends the position that - in the long run- nonviolence works better than violence.

There are several ways of looking at whether nonviolence works. When looking at immediate effects, violence certainly sometimes works and certainly nonviolence does not always lead to the desired outcomes. According to Michael Nagler however, phenomena like violence and nonviolence should be interpreted in the long term.

Nagler makes a difference between “work” and work. The first refers to short term, immediate effects of the use of violence or nonviolence, while work without quotation marks refers to profound changes at personal and societal level. Nagler explains that these changes take place at a much deeper level than the immediately visible effects. They work on a long term, which is precisely where violence fails most reliably.

Nagler poses the question whether violence does work. He notices that violence sometimes achieves its immediate purpose, like the International Communities’ bombing of Iraq after Saddam Hussein invaded Kuwait, when Saddam withdrew from Kuwait after a couple of days. This intervention “worked” on the short term, on the long term though it had many negative effects, like the death of about 100.000 people, the burning of oil fields and an ecological disaster in the Gulf. Moreover Saddam Hussein continued his oppression of the Iraqi population. Violence does not prevent future violence but evokes future violence and therefore Nagler says it does not work on the long term.

Every time someone uses real nonviolence, things get better according to Nagler. The system moves toward stable peace, whether or not the actor achieves his or her immediate goal. The Salt march in India for example demonstrates how an action does not “work” but does work. In the 1930’s, 2000 unarmed volunteers walked up to the gates of the Dharansana salt factory in Gujarat and subsequently were beaten to the ground by the guards. This action did not bring about the hoped for effects, apart from a few minor concessions from the government in the existing salt laws, nothing seemed to change. However the march was a very important step in the independence struggle. Independence came 16 years later but this event shifted ideas importantly about the salt marchers and the regime. It showed the oppressiveness of the system of governance that the British had imposed on India.

Nagler further discusses four examples of nonviolent resistance and explains their short and long term effects. The first two examples discuss actions undertaken to resist the Nazi regime. He chose these examples to counter an often-heard remark that nonviolence would never have worked against the Nazis. A demonstration in front of the Rosenstrasse prison in Berlin and a Catholic Father sacrificing his life in Auschwitz to save the life of another prisoner demonstrate that non-violence also has been used against the Nazis with some effect. By his act, Father Kolbe rehumanized thousands of other prisoners who recall this event as something that has given them hope and kept them alive until their liberation. A third example Nagler discusses accounts of the “holy experiment” in the state that later became known as Pennsylvania. Sir William Penn ran this colony along Quaker lines. He was in complete charge of the territory, of both the Europeans and the Indians, and in all cases he dealt with people along nonviolent lines. Nonviolence therefore is not only a form of resistance against the establishment but can also be a policy of a regime. A last example Nagler mentions is the Prague Spring in 1968.

Why didn’t nonviolence work at a much larger scale? In order to answer this question, Nagler has developed in the tradition of Gandhi, the law of mathematical proportion. Gandhi said that the success of their efforts in the last Free India campaign in 1942 was “mathematically proportionate” to the purity of their nonviolence. Just as violence comes in degrees, so does non-violence. In order to effectively counter extreme violence, the act of non-violence should also be extreme. And here lies exactly the problem. While Nagler states that “when you have sufficient knowledge of how non-violence works and can think of the appropriate way to mobilise it, it could even be used to make obsolete the scourge of war”, this knowledge is mostly lacking. One of the best reasons therefore to read the book and find ways to appropriate some of the existing knowledge and to let it start working first at a small scale in our own lives but possibly affecting the lives of many others.