The four steps to power of the dominated

This staircase summarizes the four steps of transformation from diffuse frustration born of a unfocused awareness of interests, to a substantive expression of these interests in such a way so as to reconcile them with those of the adversary.

The staircase concept relies on two main theoretical foundations: on the one hand the theory of negotiation, and on the other hand the sociology of collective action. The first is at the basis of this model since it was created from the starting point of the top step. In effect, it is about looking for a fair compromise in a situation of asymmetrical power. Under what circumstances could negotiation lead to such a result in these conditions? The notion of BATNA (Best Alternative to Negotiated Agreement) expresses the necessity for the weakest party to construct an alternative option that is less desirable to the adverse party than obtaining agreement. This is the key that allows the party that has less power in the negotiations to obtain a favorable agreement. In conflicting situations between businesses and local populations the issue is therefore to identify actions that can be taken by the latter that would be more costly than negotiating an agreement.

This is a rapid overview of the reasoning that leads us to the necessity of the local population to develop a capacity for collective action, especially in order to damage the business involved. It is important to identify actions which can be articulated along with the process of negotiation (beforehand, that can be used as a threat during negotiation, as well as after…).

Putting this forward as a necessary capacity for action brings us back to sociology of collective action. In the following section we describe the three dimensions of this with which we are particularly concerned.

The first element of conflict, in its most basic form that this process seeks to transform is individual anger. It is sometimes described as a feeling of frustration or deprivation born from the perceived gap between the good which people feel entitled to (value expectations), and that which they think they can obtain (value capabilities) (Ted Gurr, Why Men Rebel, 1970). This can sometimes be expressed as feelings of injustice in which one considers oneself a victim (William Gamson, Encounters With Unjust Authorities, 1982).

From a normative and cognitive point of view, the sentiment of injustice assumes the existence of stable principles of justice, which allows the individual to establish a judgment, on the basis of which each is able argue why what he undergoes is injust. The use of the term anger is used to translate these sociological concepts into simple language. It is about recognizing that anger is a positive emotion, and that we are right to be angry in unjust situations.

The sociology of social movements puts forward the role of ‘protest entrepreneurs’ who work to translate latent frustrations and to combine dispersed anger. They must express injustice and put it into words to point out causes, responsibilities and the way to combat it. The first step of the staircase, that of ‘sharing anger,’ corresponds to the process described above.

The minimum conditions for collective organization are shared objectives and identification of those responsible for injustices being perpetrated (the first step). However these basic conditions will only lead to weak forms of protest. To establish solid collective action, that will be repeated, Oberschall identifies two structural factors: an organizational base, and continuity of the movement established.

For each of these two structural factors, Oberschall shows the necessity of using existing resources: villages, families and communities. Traditional community solidarity is an important resource for structuring strong collective organizations, and giving recognized leaders and goals.

For Oberschall weak organizational capacity is the principal cause of short lived, violent and little thought-out revolts, such as the peasant revolts described by the historian Rudé that took place in France before the Revolution, or even the contemporary urban riots in the American ghettos and French suburbs.

The third step of the step model has also been derived from the sociology of social movements, more specifically that of the “social-movement repertoire” developed by Charles Tilly. In effect, the third step of the staircase is where actors using the organizational base as a resource to develop possible actions. It is about drawing on existing knowledge of the field, about mobilization using symbolism that resonates with the lives of people, encourage mobilization, and possibly even promote communication through the media towards the outside world.

This notion of social-movement repertoire, while different from its use by Tilly, who attempted to identify its traces in the long-term history of European social movements, allows us to put together the a toolbox of action which can then be used as leverage in the course of negotiations. The diversity and variable impact of actions from the repertoire will add to the strength of the position of the population in negotiations by multiplying the BATNAs possible at each stage. 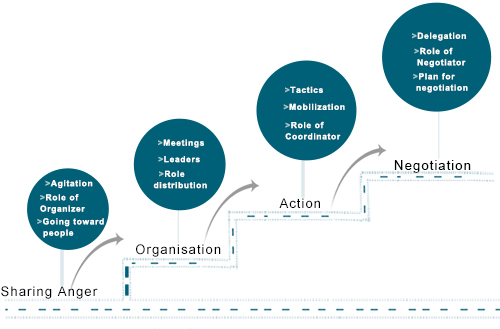